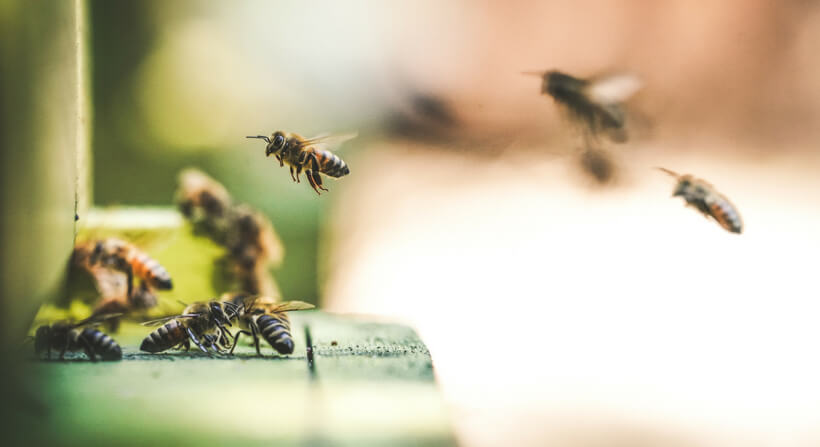 The bees had arrived on the balcony as a surprise; it’s a pity they were lost

One muggy evening in March, my better half called me out while picking up clothes which she had left for drying in the morning.

“There is something weird on the clothes drying stand.” She couldn’t figure out what it was in the dark. I went to check, expecting a ‘creepy crawly’ that might have spooked her. It is my special area of expertise to pick up all these creatures and carry them out of the house and let them go safely. Butterflies, praying mantis, moths and so on. Was it a bat? I fetched a torchlight, and we were surprised. It was a small beehive! It had suddenly appeared on a particular rod on the clothes stand after we had left for work during the day. We decided to sleep over it.

In the morning we found that the bees were small in size. The hive was no bigger than the palm of my hand. Google helped to find out that the bees were dwarf bees. I learned that sometimes dwarf bees appear as part of their swarming journey and typically leave in a few days when they find their new home. We let them be. Neither of us is in favor of harming any creatures, and bees are no exception. As days passed, we noticed that the bees had actually settled down. Our house on the third floor in the Bengaluru locality of HSR layout was perhaps the tallest tree they could find and in the erstwhile garden city. The clothes stand was its branches on which they could safely build their hive.

My wife and the bees were getting along fine. She would go about the business of drying clothes without touching the particular rod on which they were parked. They never bothered her either. The bees had an efficient routine. They would wake up around 7 in the morning. At first, a couple of bees would fly off to find nectar. Once back, they would communicate to other bees where to find food, though some dancing action. Some more would join them and come back with nectar and pollen from flowering trees. “Busy as a bee” they were. They would wind up before it got dark, in neat little rows covering the hive. I didn’t realize when we had fallen in love with them. I got two pieces of wooden barricades and placed them around the stand to ensure that nobody went close to the bees and disturbed them. The bees were our little friends. Life went on for two more months. At times we used to watch the bees closely. We were never attacked or bitten by them. They simply went about their lives and work.

But one day, disaster struck. I was inside the house one evening when my wife returned from work and wondered why there were two persons in the balcony. “They have destroyed the beehive!” She was shocked. Our landlord had sent some workers to get rid of the beehive, seeing it as a potential threat to human beings. The usual means to accomplish this is to use fire. I didn’t have the courage to go and see what they had done to the innocent bees.

My wife couldn’t stop. “Why burn them? Why didn’t they tell us first? We could have relocated them to a safer place with the help of a bee catcher.” I wept that night and couldn’t understand why as humans we were so cruel to fellow creatures. My little friends are gone. I don’t look at that corner in the balcony anymore as it brings tears in my eyes. In hindsight, it was my mistake to assume that the people around us are mature enough to let them live peacefully. People living in cities aren’t quite in tune with nature. Our first response is to kill a creature without even finding an alternative solution that won’t harm it. Bees or snakes are summarily destroyed as they might bite. This is survival of the fittest at its worst.

I just wish people would understand that life begets life. The bees gather nectar and pollen, in turn pollinating plants. We eat fruits and vegetables pollinated by them. Without bees, hundreds of tree species won’t bear fruit, pushing us on the brink of food scarcity. I urge people to give bees a chance. They have their own lives and children to take care of, just as us. We would protect our family if somebody attacked our loved ones. It is the same with bees. If you attack them, they will hit back. Won’t we be judged by nature, which we anyway take for granted? Haven’t we destroyed nature enough for our children and the future generations? What I know of sure is that when the bees were around, my wife and I actually communicated with them. We meant no harm and believed that we could co-exist happily.