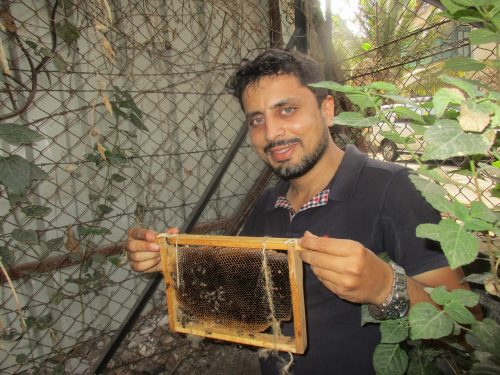 It was March 2013 when Amit Godse was working as a software engineer in Capgemini, Mumbai and came to his flat in a residential society in Pune to spend a weekend. During the weekend, he found out that almost 1.5 lakh bees were killed by a pest control team called in by the housing society members.The sight disturbed this young man so much that he started researching on how he could save bees without harming humans.

By the end of 2013, saving bees became the mission of Amit’s life and so he left his corporate job where he had a package of Rs. 9 lakh per annum. For the next one year, Amit visited every place possible across India to learn bee-keeping and bee-handling. While he visited many research centres in Kerala, Orissa, Mahabaleshwar and took a month’s training in The Central Bee Research and Training Institute in Pune he also kept visiting tribals and the farmers who knew traditional methods of bee handling.

beebasket honey honey bee conservation honeybee save honeybees
Share this post
One person’s pest is other’s pet
Save our ecosystem – Time To Beehave!