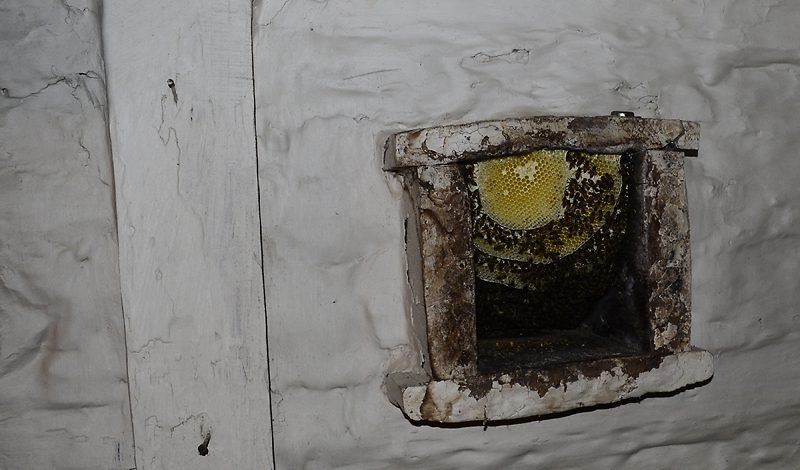 Mohana village is a tiny village of around hundred and fifty families nestled in the folds of the Himalayas. This village is situated in a region called the Jaunsar Bawar in the Chakrata district of Dehradun. Being cut off from the surroundings, this region retains a unique socio cultural identity quite distinct from other Himalayan communities.

The villagers of Mohana are mainly farmers. Water for daily needs and irrigation comes from a perennial stream emerging from the mountain behind the village. Taro, ginger, rajma , sweet peas and amaranth are the staple crops. Fruit bearing trees are grown on the hill slopes and around the houses. Cows and sheep are also reared for milk and meat.

The architecture in the village has evolved as an effect of the local geography and climate. A typical jausari house is two-storied. It is built on a terrain carved from the hillside. The lower half of the house is built in local stone with thick walls. This portion of the house is mainly used to keep the cattle, the farm produce and other stores. The living quarters and the kitchen are in the upper part of the house which is made of deodar wood. It is intricately carved and skillfully joined. The entrance is via a short steep staircase with a hatch like door parallel to the floor. The windows too are kept small to retain heat during the chilly winters. The sloping roof is covered with local slate.

A unique feature of the traditional jaunsari houses is that the local architecture recognizes the need for honey as a necessary part of the regular diet. Many local houses have a provision to maintain bee hives within the stone walls.The architectural design of the house incorporates a special place kept specifically to encourage Apis cerana bees to settle and make hives. This place for the honey bees is like a window frame. The stone walls are quite thick, so a cavity of around 3ft by 3ft and almost the same measurement in depth is generated for the bees to make their hives. The side open to the environment, from which the bees enter, is covered with decorated wooden panels with a single small opening for the bees to come and go freely. Inside the house, the open portion of the frame is kept covered with a fine white muslin cloth. Honey is harvested twice a year and it is extracted by uncovering the cloth and cutting some of the portions from the combs, making sure that enough honey is kept for the bee colony to sustain itself.

In commercial bee boxes, the queen bee is trapped inside the box so as to ensure that the colony does not desert the box. In case of honey harvesting in Mohana village, the villagers induce the bees to enter the wall cavity by creating the right conditions. This involves cleaning the area with special herbs and coating the walls with honey to attract the bees. Once the bees find the place, they start building the hives and remain there till the colony is active. These are native Apis cerana bees. And apart from harvesting the honey in a sustainable manner, the home owners hardly do anything to care for the bees so as not to cause any kind of interference in their natural way of living. The fields and orchards nearby the house and surrouning forests provide enough nectar and pollen to these bees. The queen is not trapped and is free to leave the hive if she so desires.

This symbiotic relationship of man providing shelter to the  bees and they in turn providing honey and pollination service to the man must have been in practice since the past many centuries. But sadly, these days the picture seems to be changing. The traditional houses are now expensive to build and difficult to maintain. Many young men have started working in the cities and when they decide to build new houses in their village, the houses are now generally made of bricks, cement and steel roofs. These new houses might be cheaper and faster to build but with their steel roofs and large glass windows they are not as energy efficient as the architecture that has evolved over the centuries with the landscape. Also, the new houses do not have any place for the honey bees.

– Written by Vikram Gupchup (Alumnus of The Ecological Society, Pune)